If you have tried to Join and been denied...

We have had an unbelievable amount of spam sign-ups over the past months. If by chance your sign up was denied by mistake, please contact us and let us know that we took you for a spam-bot when you're a real artist. And please accept our apologies -- it's easy to miss the real person among tens of false email addresses.

You can reach us by emailing peterferko "at" artistsunite-ny.org (use the @ sign in place of "at")

Network will be down on Friday night

Just wanted to give everyone a heads-up that our server company needs to perform some simple but necessary maintenance on the Artists Unite Member Network this coming Friday, December 2nd. We’ll need to take the site down from 1am-2am EST. During these 2 hours, we’ll simply show a message asking folks to check back later. Thanks in advance for your patience while we tune up the site!

Where is Global Dialect!?!

Participation in the call for Global Dialect was lower than expected; it appears from comments and questions that the instructions were too vague. We will be sending a second request for submissions this Fall.

My apologies to those who did submit on time, and thank you for your inspired response to the call. If you have already submitted work, you can submit additional work to the new call; otherwise, your work will be considered under the new deadline and…

an online and projected exhibition by

Despite business' and media's focus on globalization, the world and even large cities like New York exist at their human level as small communities of individuals in places with unique properties.

This project aims to unite artists through that uniqueness. It uses a global connection provided by the internet as a container for the un-global language, look, and…

The MTA-Artists Unite Subway Elevator Poster Project, a long standing effort by the community is happy to…

Here's some guidance, but register soon!

open call for ideas for the city

By the City / For the City is an opportunity for New Yorkers to tell designers what sites and characteristics of their neighborhood, borough—or even the entire city—have unrealized potential or need a thorough re-imagining. From April 11–30, New Yorkers can visit the Urban Design Week website to fill out a simple questionnaire to nominate an untapped opportunity somewhere in the five boroughs.

The IfUD will then compile and analyze…

Call For Art:  NY WCA's  first exhibition When Did "Friend" Become a Verb?  will be May 19 through June 17 at Boricua College's La Galeria (3755 Broadway - at 156th Street).
Relationships Revisited: When Did “Friend” Become a Verb?
In this new world when technology gives us the ability to connect with millions of people every day, we have trouble finding the time…
Continue

Unconventional Love at the Wallach Art Gallery at Columbia University

The Miriam and Ira D. Wallach Art Gallery at Columbia University offers an unconventional exploration of love in an exhibition titled Common Love, Aesthetics of Becoming. Rather than conceptualize love as a romantic gesture, Common Love resituates love within…

Galeria Bielska BWA is happy to announce the first edition of Artist In Residence programme. Artists from around …

Value of the MFA

For the 14th year running, apexart is accepting submissions for the Unsolicited Proposal Program. The two winners will receive the funding and administrative support from apexart to mount a show in our Manhattan space.

apexart's Unsolicited Proposal Program asks for 600 word idea-based curatorial proposals that will be juried by more than 150 people from around the world. Submissions are reviewed anonymously and solely on the strength of the idea; no previous curatorial experience… Continue

Artists Unite participated with the Bronx Museum on a design award given by the American Institute of Architects New York Chapter. The hypothetical arts center would be sited at or on the High Bridge spanning the river between Washington Heights and the Bronx, New York. Come see the imaginative ideas and winning design talent. The opening is Thursday November 11 from 5:30-8pm and the exhibition of designs will be on display until March.…
Continue 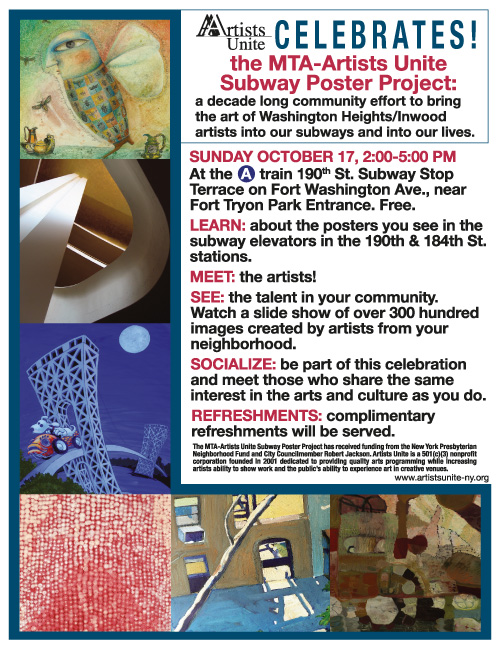 With a Vibrant Schedule of Events

are you going to enter the art prize competition?

by now I think most people have heard of the great Grand Rapids, Michigan http://www.artprize.org/http://www.artprize.org/.
These kinds of things always have us scratching our heads and trading emails with subjects along the lines of 'are you going to do this?'
What do you think of this kind of outlet for your work? What about competitions in general, where you're often…
Continue