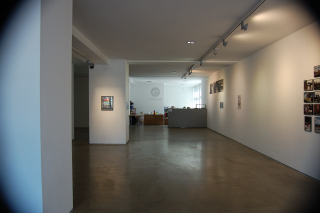 Today, we visited Bytom's sole contemporary "gallery," which is funded by the city as part of the Cultural Center that houses the dance festival we've been enjoying. The gallery, Kronica, seems to operate on a theoretical level. Our host, Stach Ruksza, described the mission as bringing something of the "alien" to the Polish Silesian region. Whereas many other parts of Poland and Eastern Europe are experiencing an influx of "the outsider" through immigration (or have through history), Silesia is an area that thinks of itself in isolation from both Poland and Germany, which it used to be part of. Ruksza claims to be bringing the outsider into the culture in the form of art -- contemporary Polish art, which is as out of place in this traditional, isolated area as an immigrant population would be.

I said the gallery operates theoretically. By that, I mean that there is no audience for contemporary art in Bytom. The gallery pursues three "strategies" in developing it's activities: 1) a residency in which an artist takes over a large room in the gallery and creates what he will; 2) exhibitions in the main space; and 3) Looking for opportunities to make public political moves that bring media or legal attention. (The best example so far was showing a work in which the Pope held Elton John's decapitated head. That show led to a lawsuit, which the gallery won.)

The gallery hopes to create a network opportunity for other contemporary performing and visual arts organizations who are similarly working in out-of-the-way locations throughout Central and Eastern Europe, perhaps through a conference or other joint activity. For now, Kronica remains connected by showing top artists from the region and creating interesting publications and catalogs.

I will try to obtain names of artists for the work in the current exhibit, which we went through very quickly. The current exhibition, Unnatural History, curated by Sebastian Cichocki and Ruksza, tackles the problems of Silesia recovering from its past industrialization. It includes classic Polish art from the Soviet era, transitional contemporary art, such as a 1956 photograph of a coal miner with his shovel boldly held up in front of his face. (The photo was a flaunting of the social realist style which only showed workers optimistic and cooperative.) Other works are contemporary, including a lightbox photograph of six miners with their helmet lights on. Each light shines overly brightly with the backlighting and together create the Big Dipper constellation which stands out of the photo. The centerpiece of the exhibition is an imposing machine, approximately 20 ft (6m) long made of motors and piping. The machine positions a blade over a flattened pile of sand, and through a set of antique iron switches and joy stick gives the observer the opportunity to draw something in the sand (Sand Drawing Machine, Adam Garnek). The piece very cleverly captures the notion of much ado about nothing and serves as a perfect metaphor for industrialization making a huge impact without lasting benefits.