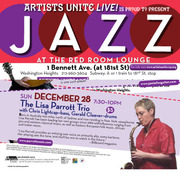 Artists Unite is proud to present two concerts at a new venue for Jazz in Washington Heights, The Red Room at 1 Bennett Avenue and 181st St., featuring contemporary musicians based in the NYC area. The Red Room is a cozy and intimate lounge setting that is perfect for presenting improvising musicians up close. The concerts will take place on two Sunday evenings, December 7 and December 28 from 7:30-10 pm. (Take the A or No.1 Train to 181st. Stop) Phone is 212-960-3604.

Admission $5 for each concert.

Jazz guitarist Jamie Fox and his Trio play original music featured on his CD "When I Get Home". With shades of Jazz, Blues, and Americana, Jamie has his own melodic and story telling approach to contemporary Jazz guitar. Jamie Fox, originally from California, has performed world wide, in concert and on television, including the Montreaux Jazz Festival. A semifinalist in the Thelonious Monk International Jazz competition in 1995, he has worked with artists as diverse as Brother Jack Mc Duff, Dr. John, Ernie Watts, Gene Harris, Jen Chapin,Tiger Okoshi, Carla Thomas, Otis Clay and The Shirelles.

"There are many musicians flying under the radar of the limelight who are just as masterful as those receiving more notoriety...its clear that guitarist Jamie Fox is one such player." Mark Turner-Allaboutjazz.com

Born in Australia - 100 miles north of Sydney, Lisa started studying clarinet and piano from the age of six. Lisa's reputation grew as an innovative bandleader and an in demand freelancer around the Sydney scene. Lisa has been leading her own groups since 1989 with Influences ranging from jazz and western classical music, as well as Eastern European folk music, African and Indian music. Lisa came to New York in 1993 on an Australian government grant to study with Steve Coleman. Since then in the USA, Lisa has performed with such great musicians as -Dave Brubeck, Diane Schuur, Gregory Hines, Rachel Z, Cindy Blackman, Gunther Schuller, , Denis Charles, DIVA, and the Jimmy Heath Big Band.

“Lisa Parrott provides an enticing new voice on primarily alto, some baritone. Her playing sets the tone, and she’ll be one to watch in the future.” Billboard magazine